A patient in a mental hospital tells anyone who will listen his story of chasing a Kappa in the woods, when he fell down a hole and landed in Kappaland, a parallel world to the one above. And, by the way, friends he made in Kappaland come back to visit him nightly.

What’s a Kappa? It’s a scaly, amphibious human-like mythical creature in Japanese culture. Kappas are small, so the furniture and houses the man visits makes him feels like he is in a nursery. Things that we take seriously, like death, the Kappas find humorous. Females chase the males. Baby Kappas have to agree to be born; they can walk and talk from birth. Some are born old and reverse age through life. Some have homosexual experiences; some drink themselves to death. 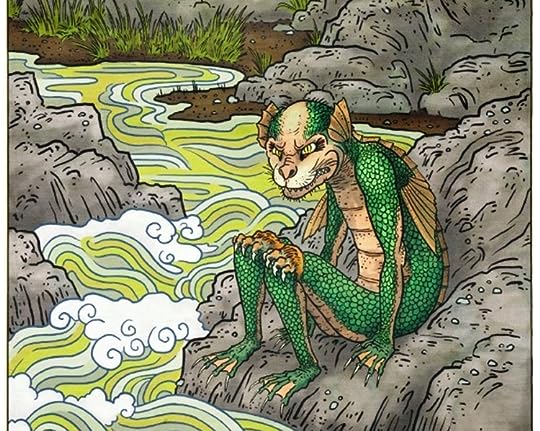 Their parallel world has a parallel culture to ours with art, music and literature. The unemployed are killed and eaten to save them the bother of committing suicide. They war against the Otters. They have the same major religions we do but the one followed by most people is ‘Viverism’ which simply means “to live” as in the sense of “eating rice, drinking wine and having sex.” Kappa suicides come back in a paranormal Q & A session where they ask questions such as how is my child? and what’s happened to my house?

So we have a satire of Japanese society and culture. Capitalism, politics, art, music, literature, and even family structure all get their shots from the author. Art censorship in Kappaland is “more progressive than that in Japan.” A new book of philosophy is called “Words of the Fool.” The philosopher states that “the ideas essential to our livelihood were burnt out three thousand years ago. No doubt all that we do is add new flames to old faggots.” And, by the way, the ink they use in their books is made from “ass-brain.”

But saying this short book is a satire of Japanese culture is just the start. We are told in the introduction that the author “had come to regard life as a shabby and despicable affair that could only achieve any sort of beauty when refined and polished by art.” So one interpretation of Kappa is that it is not just a parody making fun of art and politics but a parody of humanity: a misanthrope’s feeling of revulsion and disgust for human society that was fundamentally evil.

This misanthropic view was the author’s final verdict on life while he was ill, in pain, and on opium shortly before his suicide in 1927 at age 35. He joined the long list of Japanese male authors who took their life. All his life he had feared inheriting insanity which ran in his family. He also got into ghosts and the paranormal. He suffered from schizophrenia and had feelings of persecution, hallucinations and déjà vécu experiences -- where he felt he had lived through his life before and current events were all a repeat of past experiences. 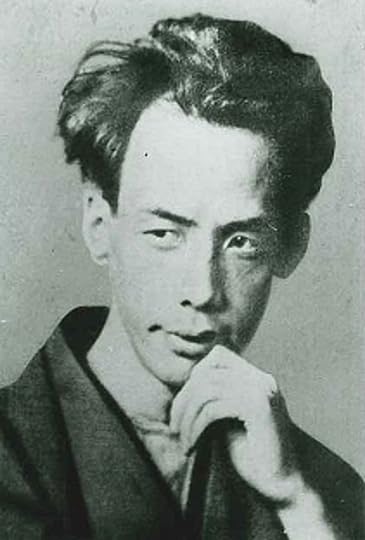 Akutagawa has been called the “father of the Japanese short story.” And Kappa is short – about 95 pages, so the paperback is pumped up with a 40-page introduction about the story, the author’s life and his other works. One of Japans two premier literary awards, the Akutagawa Prize, is named in his honor.

It’s an interesting read – kind of like putting Jonathan Swift, Alice’s rabbit hole and Coleridge’s opium into a blender and pressing puree.

Top image from jpninfo.com
Photo of the author from wikipedia

Kappa is a graphic emoticon commonly used by trolls as a postscript to a sentence to convey sarcasm on the live streaming video platform Twitch; it's popularity.
Ryūnosuke Akutagawa

How Kappa Became The Face Of Twitch

Kappa is an Italian sportswear brand founded in Turin , Piedmont , Italy. On 20 February , it was announced Kappa began a partnership with the Alfa Romeo Sauber F1 Team, supplying the team and drivers with gear, and featuring the logo on the cars' headrests. Kappa sponsored Scottish band Mogwai — the notes to their album Come On Die Young included a line stating "Mogwai wear Kappa clothing"; they also named a track on the album after the brand. Excludes articles found in Category:Sportswear brands. From Wikipedia, the free encyclopedia. For other uses, see Kappa disambiguation. This article has multiple issues.

Want to add to the discussion?

The black-and-white emoticon of a slightly smirking man bubbled up from the depths of the streaming community in and quickly became ubiquitous in online gaming circles. Either way, Kappa is easy to understand: It just indicates sarcasm, irony, or a joke. And while millions use the expression few know how it came to be. Kappa is a grayscale photo of Josh DeSeno, a former employee of Justin. If you use Twitch, then Justin. It was created in to allow anyone to broadcast videos online.

The face behind Kappa? Discussion self. Does anyone know the background on the Kappa face, who is he is he real? Am i stupid for asking this?! Twitch used to have an employee named Josh Kappa back when it was Justin. Kappa the monochrome face received popularity for being synonymous with either sarcasm or trolling and they kept the emote after he left. The story behind Kappa is fairly simple!

He has large, close-set eyes, thin lips, and dimples on his cheeks. Blame video games. Light trolling, in other words. And light trolling appears to be one of the most popular forms of human interaction today. More than million people use Twitch each month to livestream video games, watch others play, and chat with one another about the games.

Footwork the story of fred and adele astaire

Bbc a brief history of mathematics

Be careful what you wish for jeffrey archer pdf

2 thoughts on “Kappa by Ryūnosuke Akutagawa”